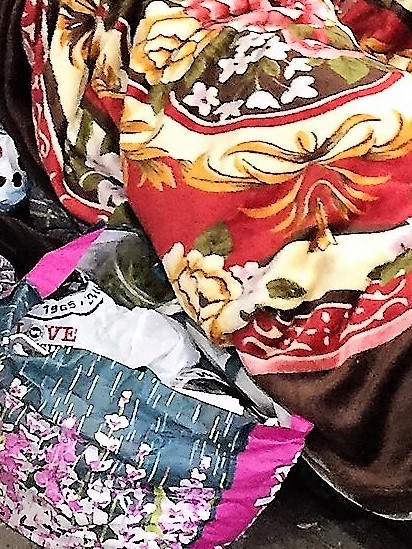 The Big Apple received its first arctic blast of the season on November 11, 2017. Temperatures dropped to 23 degrees, setting a new record for the city. Savvy New Yorkers, bundled up in puffer coats, gloves, and wrap-around scarves, scurried about as usual on foot—or rather on boot.

Construction and renovation of buildings are constant in this city. As a visitor to Manhattan and unaccustomed to a wind chill in mid-November, I put my head down to block the icy blasts and hurried along a sidewalk under improvement. Suddenly I spotted—something or someone — hidden under a mound. A vibrant colorful blanket caught my eye.  Under this unusual showpiece covering, I suspected must be layers of insulation to preserve body heat— old newspapers, fragments of moving pads, plastic garbage bags, cast-off quilts, and a cardboard mattress.

It was the blanket; however, that made a statement…

it broadcasted here —on this pallet— a special person lives.  A slight movement at the foot of this bundle, seemed like a dog might be inside too, wagging its tail. Next to the mound were shopping bags and a suitcase, not so unusual in the traveling homeless population.

Above the rounded pile where the person slept were signs of homemaking. In a make-shift open-air closet, shirts hung neatly on hangers from scaffolding poles, as were pairs of shoes, perfectly matched, clipped to hangers by clothes pins and hung on opposite poles. It was clear that this cocooned person was innovative and a natural nester. She/he made this spot on a busy sidewalk, in the most populous city in the United States, a home. Some folks just have the knack.

According to The Coalition for the Homeless in New York City, In September 2017, there were 62,351 homeless people including 15,553 homeless families with 23,445 homeless children, sleeping each night in the New York City municipal shelter system.

The hotel where I was staying in the city, mere blocks from this homeless person living on a sidewalk seemed worlds apart. The injustice hurt. My heart ached and still does for those who endure this life.

Despite the cold and the cruel way this person lives for whatever reason, my heart was opened seeing the ownership, the resolve, and the raw beauty created by a unique sidewalk homemaker.

An ode to the human spirit.