Consider this article from:

The principal of San Marcos High School resigned this week after she admitted to changing as many as 100 end-of-year grades from 2014 to 2016, according to the San Marcos school district’s superintendent. We know nothing more. There may have been a reason, but it is pretty hard to imagine what could have prompted this bizarre behavior.

Another article to give us pause:

ATLANTA — In a dramatic conclusion to what has been described as the largest cheating scandal in the nation’s history, a jury here on Wednesday convicted 11 educators for their roles in a standardized test cheating scandal that tarnished a major school district’s reputation….What is happening? Didn’t we put educators, particularly principals and superintendents, in the past on a pedestal? They were thought to be wise and above reproach ethically. They’d spent years and years in school being educated after all didn’t they? They were our communities’ superheroes, examples of what education and work could accomplish for those fortunate enough to be chosen. We looked up to them and trusted them to educate our children and model goodness. Their betrayal stings!What does this mean to children who hear about their principal’s or superintendent’s unethical behavior in these instances, and sadly, in other situations? Will there be a buzz in middle school and high school hallways between bells—“So we just have to figure out how not to get caught like these dudes,” or “What fakes, but not surprising, we are expected, to be honest in everything, then they play the game their own slimy way,” or “Bottom line—never trust anyone who’s supposed to be the boss.”

You get it. The repercussions are staggering and seemingly endless for individuals and for our society as a whole. And the fix is unclear.

Maybe America’s obsession with achievement at any cost clouded their thinking.

Maybe the focus in their training was on nuts and bolts—curriculum, instruction, and, assessment.

Maybe the really important things of educational leadership were glossed over or omitted. Things essential for any leader, Things like Flexing Ethical Muscles .

Maybe we can learn from Popeye the Sailor Man, the fictional character who came on the scene as a comic strip in 1929. His unique personality grabbed the attention of Americans young and old. Eventually, his popularity expanded to the theater, comic books, and cartoons on T.V.

An excerpt from a chapter, Flexing Ethical Muscle in The Principal’s Chair, Who Sits There Matters. A Secret of School Success by Dr.Judith D. Knotts:

Presidents, heads of state, politicians, CEOs, religious leaders, and heads of schools have been leveled at one time or another and humiliated publicly by unethical practices or immoral behavior. Popeye’s mission was moral righteousness, and his muscles were his secret. So too must your ethical muscle be in your leadership. Don’t expect it to be there when you need it in a real emergency if you haven’t flexed it and used it frequently. Muscles atrophy or grow in a person by choice. You choose how you want to live and lead with that intention. 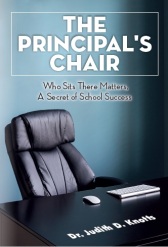 One thought on “The Rippling Effect of Ethical Missteps”